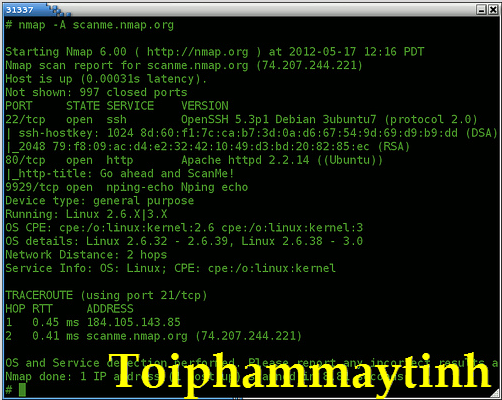 
NSE Enhanced – The Nmap Scripting Engine (NSE) has exploded in popularity and capabilities. This modular system allows users to automate a wide variety of networking tasks, from querying network applications for configuration information to vulnerability detection and advanced host discovery. The script count has grown from 59 in Nmap 5 to 348 in Nmap 6, and all of them are documented and categorized in our NSE Documentation Portal. The underlying NSE infrastructure has improved dramatically as well.


Better Web Scanning – As the Internet has grown more web-centric, Nmap has developed web scanning capabilities to keep pace. When Nmap was first released in 1997, most of the network services offered by a server listened on individual TCP or UDP ports and could be found with a simple port scan. Now, applications are just as commonly accessed via URL path instead, all sharing a web server listening on a single port. Nmap now includes many techniques for enumerating those applications, as well as performing a wide variety of other HTTP tasks, from web site spidering to brute force authentication cracking. Technologies such as SSL encryption, HTTP pipelining, and caching mechanisms are well supported.


Full IPv6 Support – Given the exhaustion of available IPv4 addresses, the Internet community is trying to move to IPv6. Nmap has been a leader in the transition, offering basic IPv6 support since 2002. But basic support isn’t enough, so we spent many months ensuring that Nmap version 6 contains full support for IP version 6. And we released it just in time for the World IPv6 Launch. We’ve created a new IPv6 OS detection system, advanced host discovery, raw-packet IPv6 port scanning, and many NSE scripts for IPv6-related protocols. It’s easy to use too—just specify the -6 argument along with IPv6 target IP addresses or DNS records. In addition, all of our web sites are now accessible via IPv6. For example, Nmap.org can be found at 2600:3c01::f03c:91ff:fe96:967c.

Better Zenmap GUI results viewer – While Nmap started out as a command-line tool and many (possibly most) users still use it that way, we’ve also developed an enhanced GUI and results viewer named Zenmap. One addition since Nmap 5 is a “filter hosts” feature which allows you to see only the hosts which match your criteria (e.g. Linux boxes, hosts running Apache, etc.) We’ve also localized the GUI to support five languages besides English. A new script selection interface helps you find and execute Nmap NSE scripts. It even tells you what arguments each script supports.


Faster scans – In Nmap’s 15-year history, performance has always been a top priority. Whether scanning one target or a million, users want scans to run as fast as possible without sacrificing accuracy. Since Nmap 5 we’ve rewritten the traceroute system for higher performance and increased the allowed parallelism of the Nmap Scripting Engine and version detection subsystems. We also performed an intense memory audit which reduced peak consumption during our benchmark scan by 90%. We made many improvements to Zenmap data structures and algorithms as well so that it can now handle large enterprise scans with ease.