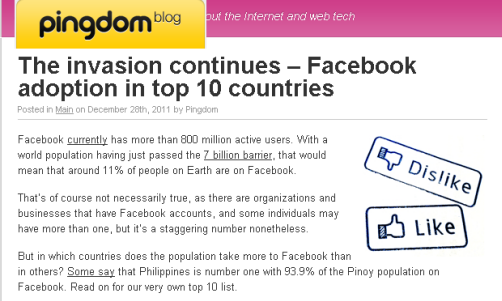 We took SocialBaker’s data on how many Facebook users there are in countries around the world, data on Internet users from the World Bank, and population data from Wikipedia. After combining all of that this is what we came up with:

As you can see we’re interested in what percentage of the population of a country that is on Facebook, not the absolute number of Facebook users. We feel that comparing Facebook users to population gives a better indication of the social network’s popularity. That’s what the yellow bars in the chart show.

The red bars show the number of Facebook users in each country as a percentage of Internet users. As can be expected, the percentages for these red bars are higher than for the yellow ones.

In other words, in all countries, a bigger slice of Internet users are on Facebook compared to what percentage of the population is on the social network.

However, in the case of Chile the difference is staggering. According to our numbers, there are more Facebook users than there are Internet users in Chile. This could be an anomaly in how the data we relied on was compiled but it could also mean that Chileans are just crazy about Facebook.

Actually out of all countries we looked at, 21 show more Facebook users than Internet users.

Almost as staggering is that 95% of Cypriots that are online are also on Facebook. To put it in another way, virtually the whole island is on Facebook.
Reconfirming Facebook’s popularity

This serves as another reminder just how big and successful Zuckerberg’s social network has become.

But not only that, Facebook’s international operations are critical to the social network’s growth as 80% of users are outside the U.S. (Facebook has said 70%).

One huge untapped market is of course China, where Facebook is blocked. Still, SocialBakers states there are almost 530,000 Facebook users in the country. But put against a population of about 1.4 billion and around 460 million Internet users, the potential market is obvious.

Finally, since we mentioned Philippines in the beginning we wanted to come back to it briefly. In the Philippines, 28.76% of the population is on Facebook, according to our numbers. And to be honest, that seems like a much more reasonable figure than 93.9%.

Note about the data: We included countries with a population of more than 500,000. We removed countries for which the World Bank doesn’t report any Internet users. That left us with 150 countries