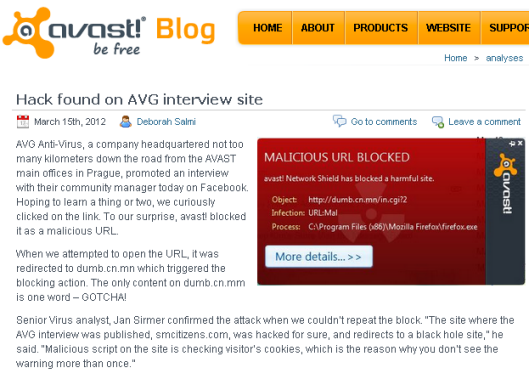 He went on to explain, “We receive only one word: GOTCHA. It’s probably because the attackers running on dumb site’s database with visiting IP addresses, and if they found this IP, only GOTCHA is returned. I think it helps them to be more secure from malware analysts and users looking into how they have been infected.”

After looking into the hack further, Sirmer discovered that the link to dumb.cn.mn, or its variations, was injected to other legitimate sites too. Those links then led to malicious sites containing a black hole exploit kit.

Here is a list of some other dumb sites used as links in hacked legitimate websites:

In the last four days, Sirmer found that the bad guys injected a link to one of the dumb sites in 138 unique legitimate sites that were visited by avast! users. This is not such a huge number, but the attackers focused on sites like smcitizens.com which has lots of visitors.

An example of injected code:

An image of our first visit to smcitizens.com.

And the second visit. Images provided by avast! Virus Lab.

This image has been marked to show the redirection to dumb.cn.mn.