[Forensic] Want CSI without the blood 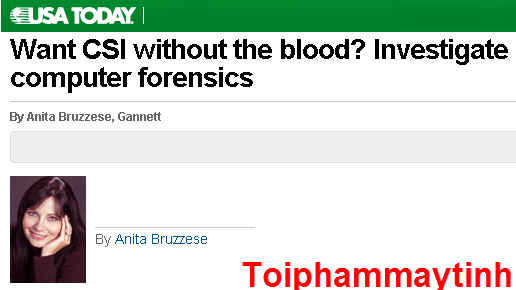 Most people may not have any idea what a computer forensics expert does beyond a general knowledge gleaned from spy novels.

But the profession may be worth exploring as a real-life career since it's expected to grow by double digits with the increasing demand for cybersecurity from public and private entities.

Steve Bunting, who has been involved in computer forensics for more than a decade as a law-enforcement officer, says he got into the work almost by accident when investigating an employee's email misuse. Now the field has become more sophisticated and specialized.

"It used to be just the province of law enforcement. But as more information used by businesses has become digitized, you need a tech team to also be working" on retrieving and protecting information, he says.

The Bureau of Labor Statistics estimates computer forensics jobs are expected to grow more than 13 percent in the next several years with starting salaries of about $46,500. The National Security Agency has plans to hire 3,000 specialists to combat the thousands of cyberattacks every day in the United States, while the Department of Homeland Security is hiring about 1,000 more cybersecurity specialists.

While some employers may not require a college degree, Bunting says many will want one or more of the computer forensic certifications available.

Why the growing demand for such specialists? Consider events in just the past year:

• Hackers broke into a Zappos' server, giving them access to the records of 24 million customers of the online shoe and clothing retailer. Although credit-card numbers reportedly were protected, an investigation is under way amid new worries that such a large company could be at risk.

• Attacks on U.S. infrastructure, such as energy and water utilities, have been documented. A nuclear lab in Tennessee was the victim of one cyberattack.

• Military drones and other computer systems were infected with a virus, and officials were unsure about whether it was introduced accidentally or on purpose — but it kept showing up even after it had been eliminated.

• In his confirmation hearing, Secretary of Defense Leon Panetta told the Senate Armed Services committee that the "next Pearl Harbor we confront could very well be a cyberattack that cripples our power systems, our grid, our security systems, our financial systems, our governmental systems."

With the increasing threat to public and private organizations, computer forensic specialists are often on the trail of criminals who may operate domestically or internationally. Many companies now have their own forensic security specialists although they work with law enforcement regarding illegal activity, Bunting says.

"Most companies don't want anyone else poking around in their system, so they'll investigate much of it themselves to protect their security," he says.

While computer skills are necessary for the work, Bunting says those well versed in that field may not be well suited for forensics work since it can be very monotonous, especially when it comes to poring through data for hours, looking for clues.

"Many tech-savvy people like more creative work or troubleshooting problems," he says. "This kind of job requires you to have great people skills, be able to write good reports and be intuitive."

In addition, computer forensic specialists often spend hours in a courtroom, testifying in cases where security was breached or explaining how they used technology to find wrongdoing.

"You've got to be able to write a lot of reports and explain technology in a way the grandmother sitting on the jury would be able understand," he says.