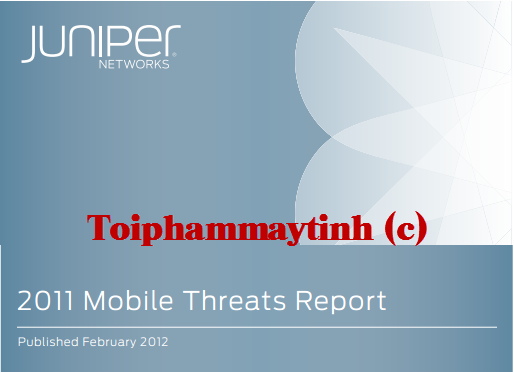 In 2011, mobile malware reached a new level of maturity. Threats targeting smartphones and tablets are beginning to pose meaningful challenges to users, enterprises and service providers.

Mobile devices and apps have become critical to both personal and work life. Not only are they ubiquitous, but they are used for a breadth of experiences from entertainment and banking to critical business applications. In 2011, global mobile handset shipments reached 1.6 billion and tablet shipments reached 66.9 million.

The sheer volume of mobile devices in use today has given rise to a staggering range of possibilities for users to interact with and manage their work and personal data while mobile. However, those same opportunities also open the door to hackers.
In 2011, Juniper Networks observed industrious hackers moving malware from proof of concept to profitability. Whether the motivation is notoriety, corporate espionage or financial gain, today’s hackers are more sophisticated and chasing higher rewards in their attacks. This means sensitive information from businesses, governments, service providers and users is at greater risk.

Findings from the Juniper Networks Mobile Threat Center (MTC) in its 2011 Mobile Threats Report, compiled by Juniper security researchers, show three signs of this maturation:
There is more mobile malware than ever before. • In 2011, there was a record number of mobile malware attacks – particularly on the Google Android platform. The combination of Google Android’s dominant market share and the lack of control over the applications appearing in the various Android application stores created a perfect storm, giving malware developers the means and incentive to focus on the platform.
Mobile malware has gotten smarter. • Malicious actors continue to hone their craft by finding new ways to exploit vulnerabilities and human behavior for profit across all mobile platforms and devices. In addition, the growing focus on security by researchers demonstrates the maturation of mobile security as an issue of concern for the business community as a whole.
There is a low barrier to entry. • Applications are turning out to be the “killer app” for hackers — and application stores are fast becoming the prime delivery mechanism for infected applications. Mobile users are downloading applications more than ever before. As we have seen a boom in the number of application developers, we have also seen a flood in the number of attackers. Juniper MTC data shows an evolution from more sophisticated, complex and deep attacks to

attacks that are lightweight, fast, and application-based.
In addition to of the rising threat of malware, consumers and enterprises remain susceptible to a very low-tech yet devastating risk: stolen or lost devices. In the last year alone, nearly one in five users of Juniper Networks Junos

Juniper MTC examined 793,631 applications and vulnerabilities across every major mobile device operating system to inform this 2011 Mobile Threats Report. Key findings and guidance, along with predictions about the evolving threat
landscape, follow in this report.

To understand the numbers associated with mobile malware growth, it is imperative to have a firm understanding of the differences between mobile and PC-related malware.
In the PC world, malware commonly consists of spyware, Trojans, adware, worms and viruses. For mobile devices, the vast majority of malware is spyware and Trojans, which are either applications or functionality hidden within other applications. As such, gauging the amount and impact of mobile malware in 2011 is largely an exercise in analyzing, tracking and quantifying mobile applications.Additionally, it is prudent to place mobile malware numbers in the proper perspective as compared to PC malware. Without question, the number of PC malware samples is drastically higher than those targeting mobile devices. One leading reason is that PC malware constantly needs to evolve to remain effective against the anti-malware capabilities available on or for most PCs.
Once PC security vendors discover malware, they add an identifying signature to detect it, essentially preventing the attack.
To remain effective, the attacker must modify the malware to bypass signatures running on the vast majority of computers. This creates variants and subtle changes in the malware creating more samples.
Conversely, the vast majority of mobile devices do not yet deploy any endpoint anti-malware solution. To infect a mobile device, a malware writer needs only to create a malicious application, post the application to an application store and simply wait for users to unwittingly install their malware.
Mobile operating systems developers like Google and Apple are now able to remotely remove malware from devices that download it from official application stores and marketplaces, which is leading malware developers to create modified versions of common types of malware in order to elude removal. However, this mitigation does nothing for the millions of downloads from the web and third party app stores.
In 2011, the Juniper MTC analyzed 793,631 applications from numerous sources, including but not limited to 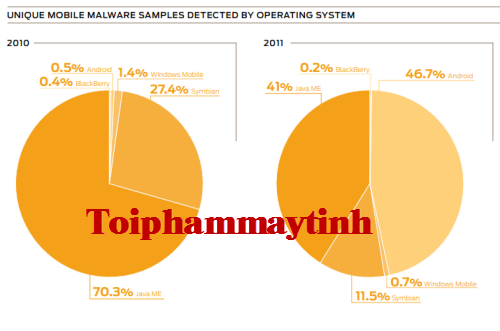