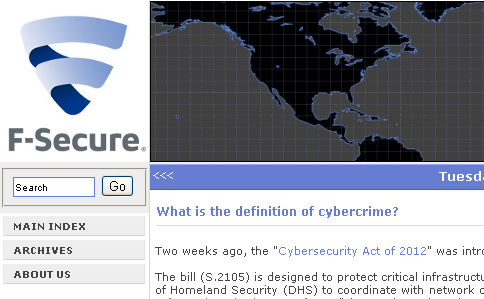 Two weeks ago, the "Cybersecurity Act of 2012" was introduced in the U.S. Senate.
The bill (S.2105) is designed to protect critical infrastructure such as water, energy, and transportation. It directs the U.S. Department of Homeland Security (DHS) to coordinate with network operators on developing security standards. A related bill, the "Cybersecurity Information Sharing Act of 2012" (S.2102) was introduced on February 13th.
Naturally, civil liberties group such as the EFF and EPIC examined the legislation. They say it's too broad.
CNET's Elinor Mills: Civil liberties groups: Proposed cybersecurity bill is too broad
Whatever else there is to say about the Cybersecurity Act of 2012, it was a bit surprising to read in CNET's article that "there is no definition of 'crime'." After all, the definition of "cybercrime" has been established for years now.
Thomas, the U.S. Library of Congress's legislative archive, provides 27 results when searching for the term "cyber".
One of those results is for S.1469, the International Cybercrime Reporting and Cooperation Act, which is sponsored by Senator Kirsten Gillibrand of New York. Anybody with an interest in cybercrime should check out Convention Committee on Cybercrime's website.
Final note: rather than worry about the definition of "crime", we would suggest that the greater concern to citizens can be found in the Cybersecurity Information Sharing Act of 2012's Section 7.