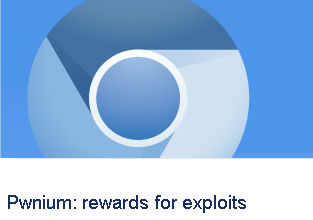 This year at the CanSecWest security conference, we will once again sponsor rewards for Google Chrome exploits. This complements and extends our Chromium Security Rewards program by recognizing that developing a fully functional exploit is significantly more work than finding and reporting a potential security bug.

The aim of our sponsorship is simple: we have a big learning opportunity when we receive full end-to-end exploits. Not only can we fix the bugs, but by studying the vulnerability and exploit techniques we can enhance our mitigations, automated testing, and sandboxing. This enables us to better protect our users.

While we’re proud of Chrome’s leading track record in past competitions, the fact is that not receiving exploits means that it’s harder to learn and improve. To maximize our chances of receiving exploits this year, we’ve upped the ante. We will directly sponsor up to $1 million worth of rewards in the following categories:

$40,000 - “Partial Chrome exploit”: Chrome / Win7 local OS user account persistence using at least one bug in Chrome itself, plus other bugs. For example, a WebKit bug combined with a Windows sandbox bug.

$20,000 - “Consolation reward, Flash / Windows / other”: Chrome / Win7 local OS user account persistence that does not use bugs in Chrome. For example, bugs in one or more of Flash, Windows or a driver. These exploits are not specific to Chrome and will be a threat to users of any web browser. Although not specifically Chrome’s issue, we’ve decided to offer consolation prizes because these findings still help us toward our mission of making the entire web safer.

All winners will also receive a Chromebook.

We will issue multiple rewards per category, up to the $1 million limit, on a first-come-first served basis. There is no splitting of winnings or “winner takes all.” We require each set of exploit bugs to be reliable, fully functional end to end, disjoint, of critical impact, present in the latest versions and genuinely “0-day,” i.e. not known to us or previously shared with third parties. Contestant’s exploits must be submitted to and judged by Google before being submitted anywhere else.

Originally, our plan was to sponsor as part of this year’s Pwn2Own competition. Unfortunately, we decided to withdraw our sponsorship when we discovered that contestants are permitted to enter Pwn2Own without having to reveal full exploits (or even all of the bugs used!) to vendors. Full exploits have been handed over in previous years, but it’s an explicit non-requirement in this year’s contest, and that’s worrisome. We will therefore be running this alternative Chrome-specific reward program. It is designed to be attractive -- not least because it stays aligned with user safety by requiring the full exploit to be submitted to us. We guarantee to send non-Chrome bugs to the appropriate vendor immediately.