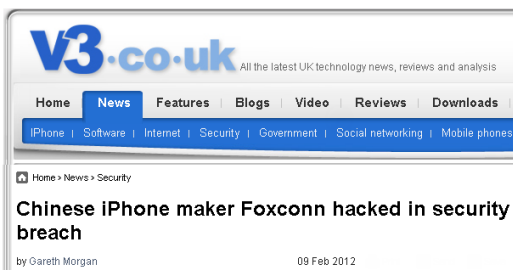 Apple's iPhone and iPad manufacturer Foxconn has had details of its employees' computer usernames and passwords leaked online after a group of hackers was apparently able to bypass its firewall protection.

A group calling itself Swagg Security posted a file on The Pirate Bay, which it claimed was obtained from Foxconn's systems.

In an accompanying note, the group bragged: "Foxconn did have an appropriate firewall, but fortunately to our intent, we were able to bypass it almost flawlessly.”

“Remember, damage is bliss,” they added.

Foxconn partners with the world's leading technology companies, making kit for the likes of Apple, IBM, HP and Motorola, but has drawn stinging criticism of its low-wage working practices, and there have been several reports of employee suicides at the firm.

Swagger Security said these reports contributed to its decision to target Foxconn.

According to Apple blog 9to5Mac, the data file posted by the hackers allowed its writers to access more than one of Foxconn's servers – although these have subsequently have been fixed with security patches.

It also said that log on credentials for Foxconn's chief executive Terry Gou were among those included in the leak, although the password appears to be encrypted.

Foxconn had been approached for comment but had not responded at the time of writing.