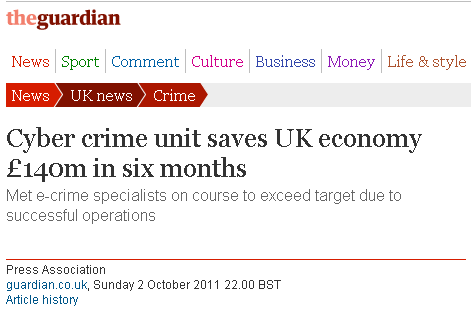 A Metropolitan police unit claims to have saved the economy more than £140m in the past six months and is on course to exceed its four-year "harm reduction" target, the force said on Sunday.
The Met said the central e-crime unit had delivered nearly 30% of its £504m target during this period.
The figure relates to the amount of money the UK has been prevented from losing through cyber crime and follows a number of successful prosecutions and operations.
Funding of £30m has been provided over four years to support the development of the unit as it tackles computer intrusion, denial of service attacks and internet fraud.
Deputy Assistant Commissioner Janet Williams said: "In the initial six-month period the unit, together with its partners in industry and international law enforcement, has excelled in its efforts to meet this substantial commitment and has delivered in excess of £140m of financial harm reduction to the UK economy. We hope to be able to better this result in the future as we expand our national capability."